Porziuncola of Santa Maria degli Angeli is the manifesto, the statement, the vision of Francis of Assisi, is the place of vocation, indulgence, meditation, connection, again, the center where to elaborate his own thought.
It is within the Porziuncola that Francis codified his behavioral alphabet, today, more contemporary than ever. The Porziuncola was born with the precise will to pay homage to the greatness of a man, -Francis -, and to collect this extraordinary legacy of thought, transmitted to us, with the intent to sugest a reflection on the
instances and urgencies that we find ourselves living, first of all, the obligation to recover a proper relationship between man and nature, between human being and human being, but also especially with themselves.
The use of materials such as: earth, the “cookie”, the habit; of color: white; light: white, intense, penetrating; jute; have been designed to invite the visitor to build their own, personal reflection, giving through the tools (the materials with which the work is made) the means to undertake this journey.

The porziuncola was born as an itinerant work, in fact every single part that composes it, is in turn a unique work that travels the places of the person who owns it. Through a card and a mapping of every single plate will be possible to reconstruct that element of universality at the base of Franciscan thought.
The silent presence, invisible but inwardly evoked by the figure of Francis of Assisi refers to the idea of nature, forgiveness, freedom, gratitude, sobriety, love, concision, joy, values that want to recall a renewed lifestyle that is increasingly urgent. The work is composed of a wooden skeleton structure painted white, on which are hung with knotted jute rope (the same that Francis wore) of monochrome ceramic plates of the size of about 42x49x1,5cm representing a piece of the
Sacred Robe worn by Francis. The wooden structure measures about 2.60 meters long by 1.70 meters wide by 2.60 meters high. The house is positioned on a substantial layer of earth that is also spread around to create an environment, a small plot of land that gives rise to the name porziuncola.

To access the inner space of the porziuncola it is necessary to take off the shoes and walk on the bare earth to ideally recover that contact with the surface that hosts and nourishes us.

Gian Luca Bianco was born in Milan in 1967 to a family of opticians. He began his artistic career in independent theaters in Milan, and, he improved in New York at The New York Conservatory for Dramatic Arts (NYCDA) and at the studio of Susan Batson. His artistic interests are developed on several levels and in different areas, with a common denominator represented by the interest in Art and Science. Since 2001 he has been living in New York, working in the film industry with Intuit Film where he was production assistant and executive producer from 2003 to 2004. In 2004 Giacomo Campiotti invited him to Italy as executive producer of Mai Più Come Prima. Produced by Prana Film and distributed by Medusa Distribuzione, he participates in several festivals, among others: Trento Film Festival, Villerupt Film Italianne Festival and Tribeca Italian Film. In 2006 he is appointed production manager of ovo.com, a platform created by Andrea Pezzi, and from 2008 to 2013 he is creative director of 21min.org, an editorial and events platform that every year gathers the most brilliant and innovative minds on the planet. In 2012 and 2013 he conceives and directs Sidereus la scienza si racconta with Eugenio Alberti, he realizes the documentaries: Giacomo Rizzolatti e la scoperta dei Neuroni Specchio, and, Giorgio Parisi e la fisica della complessità for Rai, this last medium-length film pays tribute to the Nobel Prize for Physics 2021 and is to date the only and comprehensive document dedicated to the Italian scientist. In 2014 he is the author of Racconto Interrotto, of which he writes the screenplay and directs. The film dedicated to Bepi Romagnoni is presented at the Refettorio delle Stelline in Milan on the occasion of the great Exhibition 50 years after the artist’s death.

Since 2016 he is consultant, artistic curator and author of Centodieci Arte (Banca Mediolanum), a platform for which he conceives and directs formats, events and art exhibitions. In 2018 on the occasion of Palermo Capital of Italian Culture he writes and directs Stupor Mundi starring Michele Placido presented in competition at the 17th Ischia Film Festival (2019), and, screened out of competition at the 76th Venice Film Festival. In the same year, he conceives the play Io sono Federico II with Michele Placido and Brenno Placido represented in preview at the Verdura Theatre in Palermo in June 2018 in front of more than 2,500 spectators. In 2019 together with Michele Placido projects Lionardo – The greatest work was his legacy, on the occasion of 500 years since the death of the master of the Renaissance. The opera is presented in June 2019 as the opening event of the Estate Sforzesca in Milan. On the occasion of the exhibition Josef and Anni Albers, conceived by them to make their students live a new experience related to art, Gregorio Battistoni director of the project VIBE Voyage Inside a Blind Experience, invites him to make a medium-length film accompanying a group of young blind people to live the experience of the art of Mr. and Mrs. Albers. The project is co-funded by the Creative Europe program for accessibility to art for the blind and premieres in October 2019 at the Perugia Social Film Festival (Perso). It is from 2016 the art project Imbilico Perpetua Motus Terra, (in progress), exhibited in different occasions: KM0 in Innsbruck in 2017, Montrasio Arte Milano 2017-2018-2020. In September 2017 he is invited by Lorenzo Fiorucci to exhibit Imbilico at Palazzo Ducale di Gubbio of the Polo Museale dell’Umbria. In the same year he exhibits Imbilico at Museo Civico Floriano Bodini presented by Luca Pietro Nicoletti.

In 2017 he participates in SWAB Barcelona and ArtVerona with KM0 of Innsbruck presenting the series made on acetates of Imbilico. In the summer of 2018 he is invited by the City of Macerata as part of the Festival Sferisterio directed by Barbara Minghetti to create an exhibition installation at Palazzo Bonaccorsi with the theme of the relationship between human beings and nature presented by architect Mario Cucinella. In summer 2018 and 2019 he is invited by Joseph Grima Artistic
Director of Universo Assisi and realizes 1754 a visual documentation work in collaboration with Antonio Ottomanelli. In 2018 and 2019 with Montrasio Arte participates in the Armory Show in New York, presents a light installation that earned him a mention among the most interesting projects of the year, and, at the Dusseldorf fair with original lightboxes.

He exhibits at Montrasio Arte in Monza in the exhibition Asincrono curated by Chiara Gatti presented then at Arte Fiera Bologna 2018 and Banca Mediolanum in Bologna 2018 and Spazio Modulnova in Milan on the occasion of the Salone del Mobile 2018. In 2019 he is invited by Lorenzo Fiorucci to the exhibition Codex at the
Archaeological Barracks of San Sepolcro on the occasion he presents the work In-Visibili, based on the concept of visibility and invisibility related to the migration phenomenon of the Mediterranean. In April 2019 he meets Francesco Magiore (curator and president of Cantiere Evento Fondazione Dioguardi) who invites him to create a public installation on the chisels of the construction site of the Teatro Lirico in Milan. Ricreazione was born in memory of the 10 years of the earthquake in L’Aquila in Abruzzo, a large poster of Imbilico images, some made with the children of a school in the earthquake area. The project is part of the collateral events of Miart 2019. In 2021 he exhibits some of Imbilico’s works at Kunsthalle and at BNL in Bari. In 2021 the plastic project made in ceramic entitled Reperti is exhibited by Montrasio Arte in Monza and then in Milan again with Montrasio Arte and Grossetti Arte. On this occasion is published a leporello with a critical essay by Lisa Hockemeyer. In the context of Relazioni Possibili at Startufo in Piacenza, he presented ceramic works in the chapter dedicated to architecture together with Mario Bellini and Mario Cucinella. It is also the occasion to present a preview of the educational workshop for children Imbilico_Ricreazione.

Presents in the space Volumnia of Enrica De Micheli the work the porziuncola edited by Lisa Hockemeyer with the participation of Oscar di Montigny. He has published three books: Freeze108, Imbilico Perpetua Motus Terra (selected for Object Book 2021 ADI Design Museum) and Recreation.

He lives and works between Assisi and Milan and his work is represented by Montrasio Arte Monza and Milan. 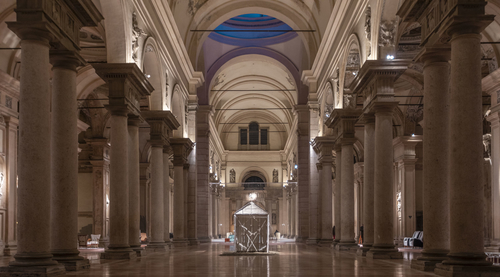 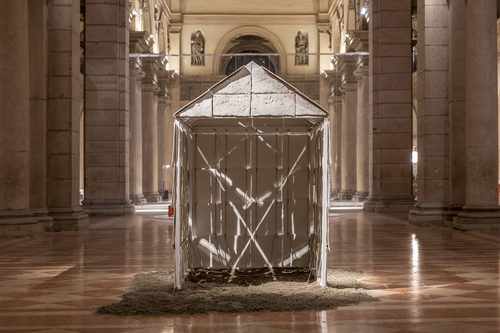 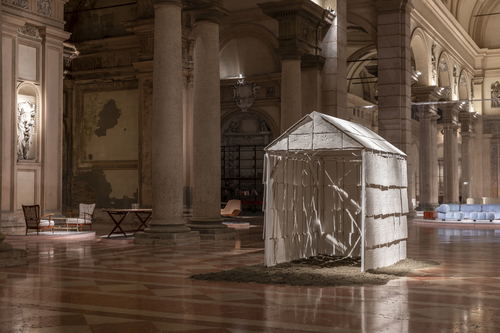 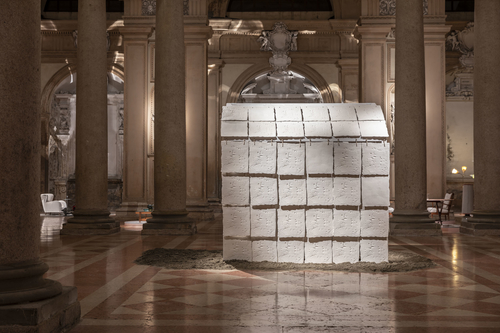 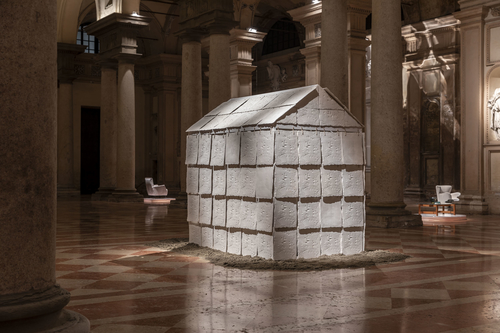 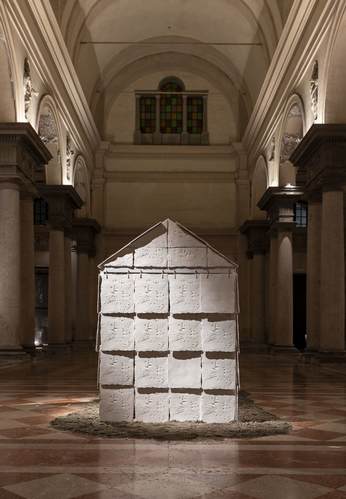 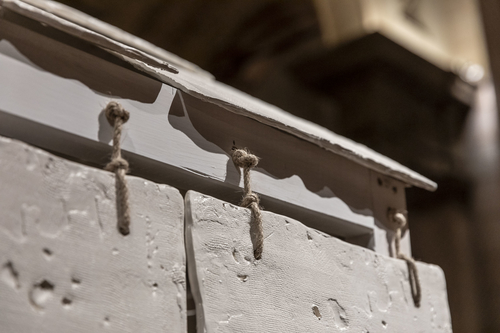 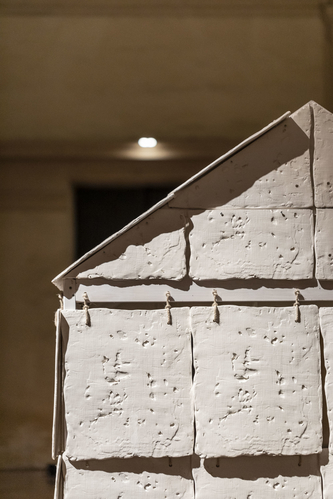 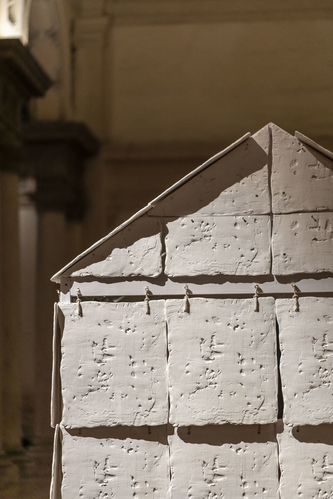 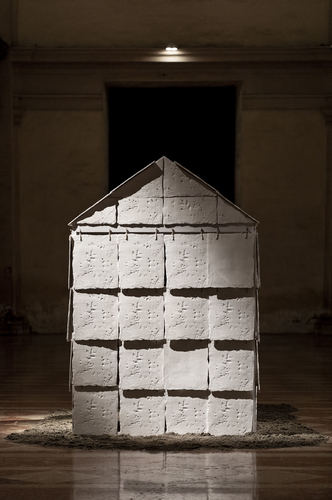 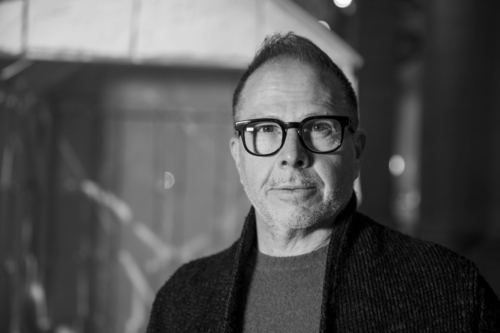